This story begins with an ending — the end of life as Monthir’s family knew it.

On Aug. 6, 2014, Monthir and his family fled the Christian village of Qaraqoush under cover of nightfall. His heart breaking, Monthir knew that from this day forward, his family’s past would be irrevocably severed from their future.

Nothing would ever be the same. 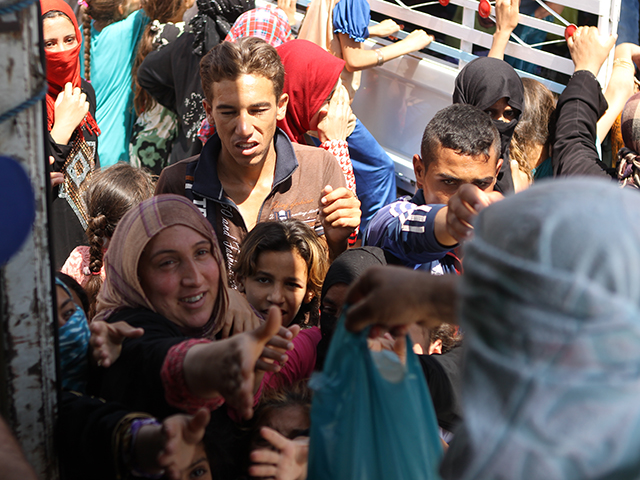 This wasn’t the way it was supposed to happen. Even as cities around them fell, Monthir and his wife had hoped their village would go unnoticed by ISIS and life would stay normal for their four children.

But when the government lost control of Mosul and mortar bombs began falling on Qaraqoush, Monthir knew they had waited long enough. It was time to flee or die — there was no alternative.

Leaving Qaraqoush didn’t just mean leaving behind their house, possessions, and friends. It also meant they now had to rely on the compassion of others for food to eat.

In Erbil — a safe city nearby — the panic was palpable as thousands of families desperately worked their way through security checkpoints into the city.

At first, Monthir slept on the streets while his wife and children were given shelter in a local church. When it became clear the city didn’t have enough food to go around, the family was forced to leave again.

Today, Monthir’s family lives in a refugee camp and is receiving food and emergency supplies through the generosity of people like you.

“The Lord blessed us with the help that you are providing. I want to thank you from my heart because my family is depending on the food that you are sending to us. Covering the cost of the food is so hard because I am jobless,” Monthir said.

Monthir and his family are only six people among millions of refugees scattered throughout the Middle East and around the world.

Although thousands of refugees share the same stories and struggles, behind each statistic is a person like Monthir with a dream of returning home. Right now, they need your help.

In order for Monthir’s family to return home, they need basic necessities to survive … and to keep their dreams alive.

For just $35, you can send food and other critical supplies to a refugee in need. Think about how refugee fathers like Monthir feel the moment a supply truck pulls into their camp. A mixture of desperation, hope, and relief sweep over them as they realize they will be able to feed their children for another day.

Because of you, maybe they hope that that one day, life might return to normal.

Today, you can send a message of solidarity to a refugee. You can say, “I’m standing beside you. I’m going to see you through this struggle.

In his soft-spoken voice, Monthir’s closing words were:

“God bless you. We are hoping that you will continue this work and keep helping people.”

This World Food Day, will you give food to a refugee? Will you help him survive until he can return home?

Pray for families like Monthir’s. And please give food today!