Today on the International Day of Prayer for the Persecuted Church, please pray with us and let Christians in Iraq know they are not forgotten.
Share Tweet
or
Send an email

Watch From the Field: Iraq | Interceding for Persecuted Christians on Vimeo

The World Help team spent the day in a refugee camp in Ankawa where hundreds of Christians have fled from Qaraqosh. ISIS has made it their aim to eradicate these people in Northern Iraq . . . but God has not allowed that to happen.

I saw this very clearly after listening to the story of a woman named Hanaa. God has preserved the lives of her family, and despite everything they have been through, they told me their faith is stronger today than ever before. 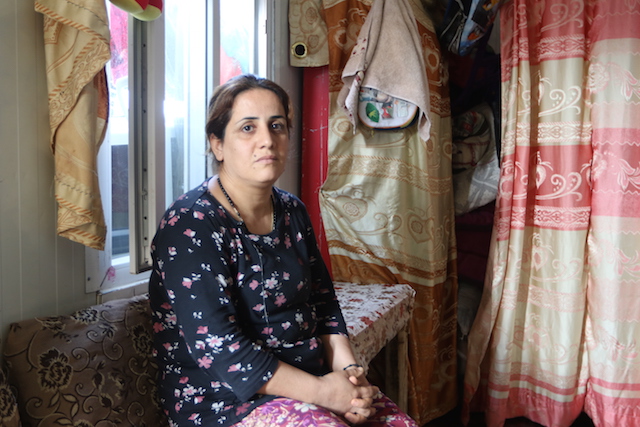 In Qaraqosh, Hanaa’s husband owned a lucrative construction business. They owned two homes and lived in a comfortable neighborhood. Her children excelled in school and enjoyed happy childhoods.

Then the rumors began to swirl in Qaraqosh.

ISIS was growing in number and strength, and word reached Hanaa that they were killing all Christians in the surrounding regions. At first, she clung to hope that Qaraqosh was safe . . . until she heard the artillery fire.

For days, her family listened as the sounds of distant gunshots and shelling grew closer. Most able men from the city had left to support Kurdish troops fighting against ISIS advances, and Hanaa felt defenseless to protect her children. 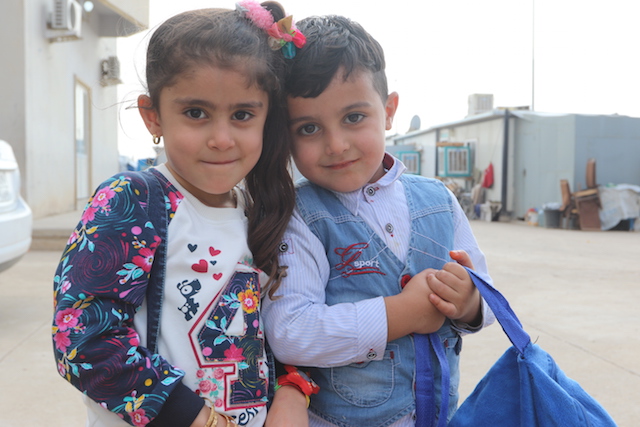 Inevitably, militants breached the line of defense in Qaraqosh and began shooting off mortar rounds. Hanaa’s young cousin—who had just become engaged two days before—was killed as result. They rushed to bury her body at a local church . . . and took this as their last warning to flee.

ISIS was on their doorstep and Qaraqosh was about to become the frontline. Hanaa, her husband, her five children, and four other related families fled during the night—the longest hours of their lives according to Hanaa.

They weaved their way through congested roads with other desperate people, all of them begging God for their lives to be spared from ISIS. Finally after hours of exhausting travel, they reached Ankawa where hundreds of other terrified Christians had also gathered. 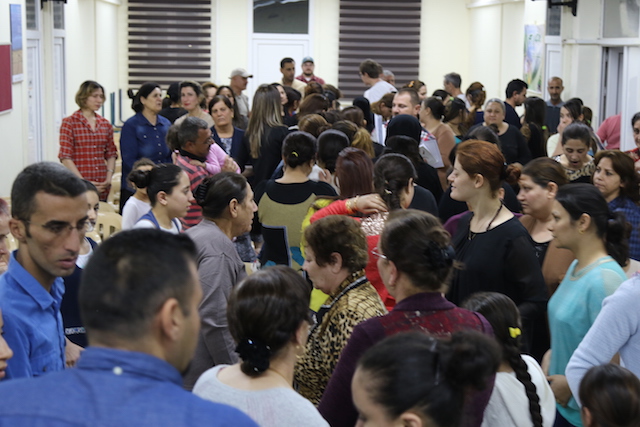 Since then, life has been difficult for Hanaa and her family. They initially found shelter in a cramped church before being relocated to a cold, storage building. From there, they were moved again to sleeping on the floor of a multipurpose building and were eventually assigned to a tent.

Today her family of seven lives in an 8 by 25-foot container. The freezing temperatures and snow have made it impossible to survive in only a plastic tent. This incredibly small area serves as their bedroom, kitchen, living room, dining room, and office. They sleep on the floor in a tight row in order to fit all of them—the comforts of their former lifestyle all but forgotten. 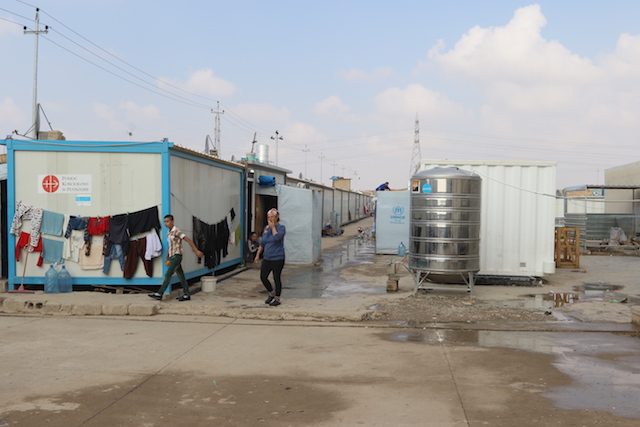 Despite these living conditions, they are incredibly grateful and take pride in maintaining their small home. Next to a collage of pictures and small crosses, I noticed dolls still in their packaging hanging on Hanaa’s wall. She told us her daughter wants to wait to open the package until they return to their home in Qaraqosh—an innocent, but powerful, glimmer of hope in the midst of such difficult circumstances. 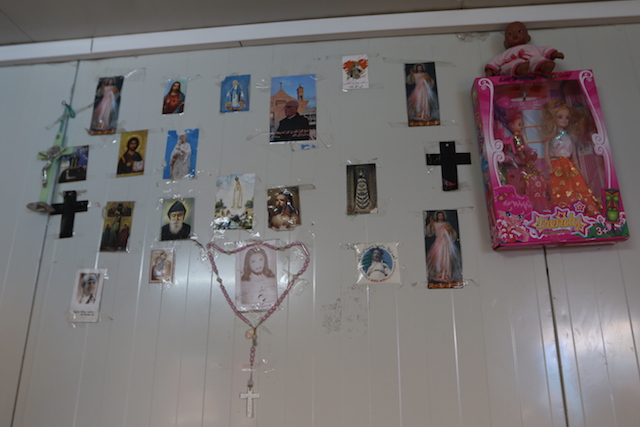 Because Ankawa is made up of a large Christian population, Hanaa and her family have found comfort and support from other Christ followers. Though they have little themselves, this community of survivors is a constant source of love, stepping in whenever they can to care for believers and nonbelievers alike. 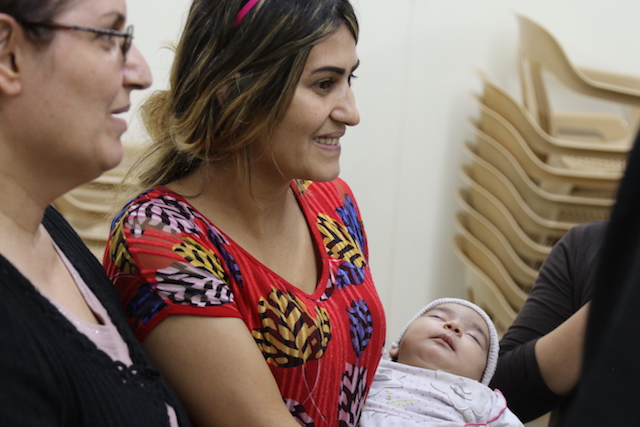 I marveled at the faith I found in Ankawa. This is the body of Christ at work.

Our team also had the privilege of joining 300 Christ followers in worship and communion at a church compound supported by World Help. This building shelters hundreds of refugees and serves as a small school for children in Ankawa. Residents here also benefit from World Help’s mobile medical clinic, which provides free services and medication to refugees with no other access to healthcare.

Before the worship service ended, Senior Vice President Tom Thompson stood in front of these persecuted refugee families and reminded them, “God loves you, and God has not forgotten you.” 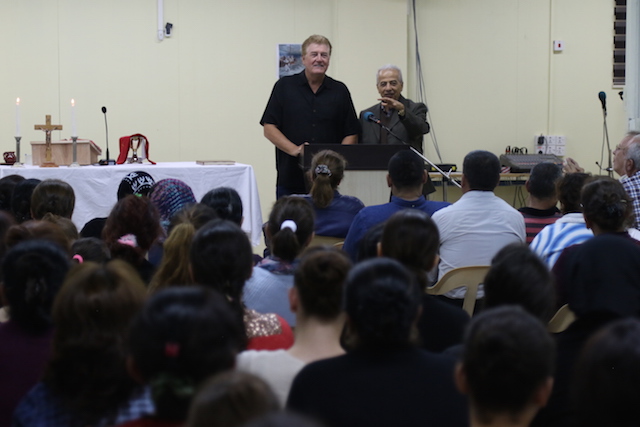 He reassured them that their family in the U.S. is praying for them, and that we will not forget about them either.

So today on the International Day of Prayer for the Persecuted Church, I’m asking you to make good on this promise to the Christians of Ankawa. They are tired, anxious, and so far from home. Though tattered, their faith holds . . . but they are in desperate need of support.

I can’t describe the renewed look on the faces of these families as the World Help team ministered to them throughout the day. I was struck by how much hope we can share through the simplest gifts—clean water, food, medicine, Bibles, and a listening ear. 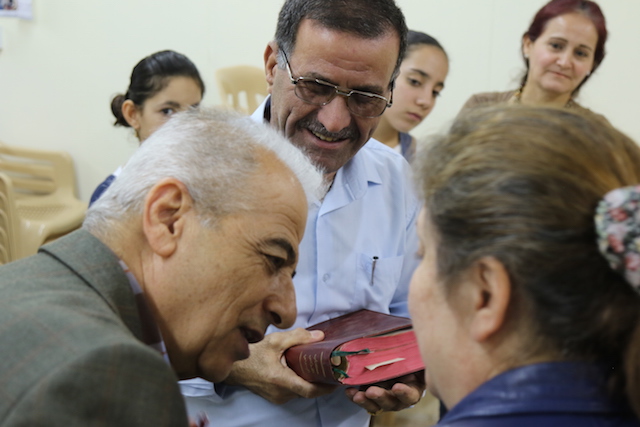 “Before you came, we had no hope. Now we have hope again,” one Christ follower told me.

Please let these persecuted brothers and sisters know they are not forgotten. Please take a moment, right now, to bow in prayer for them—for Christians throughout war-torn Middle East. Your prayers are heard and they matter greatly.

And please, please make your best gift, which will help provide these people with practical, supplies, solutions, and spiritual support. May our generosity today be an offering of what God has done for us. This is the true Body of Christ.