Rachel Godwin
Jul 26, 2018
Every relationship between a child and his sponsor is special … but Myrna Duvall has a particularly unique bond with her sponsored kids that she knows was orchestrated by God.

“We already sponsored kids in Ghana,” Myrna recalled. “So I thought, ‘I’m not going to sponsor anyone else when I travel to Guatemala.’”

But God had other plans.

While touring Kelly’s House, a home for Guatemalan children with special needs, Myrna met a little girl who went by the nickname Mimi. Mimi had been brought to the Rescue Center because she had cerebral palsy and there was no access to the special care she needed in her impoverished, mountain village.

Immediately, Myrna’s mind was flooded with memories of her own daughter who had struggled with cerebral palsy. “She reminded me so much of Susan,” Myrna said. “And it just really got me thinking of her here without a mom.”

Myrna called her husband, Richard, and they agreed they would sponsor Mimi.

Two years later, Myrna returned to Guatemala and helped lead a women’s Bible study in the community where her church was doing a Village Transformation. As always, Susan was in her heart and on her mind.

“I shared my testimony and really just talked about Susan,” Myrna said. She shared how having the Lord in her life had kept her marriage strong and filled her with joy, even during the toughest days as she dealt with Susan’s death.

After the Bible study, a woman came up to Myrna, carrying an 8-year-old girl. “I want to have that faith,” she said through an interpreter. She then gingerly lowered her daughter, Concepcion, to the ground to show Myrna what she meant. The little girl’s legs crumpled. She had cerebral palsy, too.

“That really, really got me,” Myrna said, her voice breaking. “It was like God had given me that message just for her.”

Myrna could see how much Concepcion’s mother cared for her. It reminded her of one of the most pivotal days in her own life — a day that happened decades earlier.

Richard and Myrna were in the car, 3-month-old Susan strapped into her car seat behind them. They had just left the cold, sterile office of a specialist whose words shook Myrna to the core.

“I remember his speech by heart,” she said. “He told us, ‘Susan will never walk. She will never talk. She will never be able to even hold up a pencil in her hand. She’ll be dead by the time she’s 2. My advice to you is to put her in an institution so you won’t love her and won’t get attached to her.’”

Myrna and Richard had a long, two-hour drive back home from the specialist. But during that time, they came to a conclusion: “My husband and I decided, ‘If Susan only has two years to live, we’re going to love her to death for as long as we can.’”

It turns out the doctor was mostly right. Susan was never able to walk or talk or feed herself. But he was wrong about one thing — she lived many happy years surrounded by a family that loved her dearly.

“Concepcion’s mom loves her as much as I loved my daughter,” Myrna said. The only difference was that Concepcion’s family didn’t have access to the care that was available to Susan in America.

So Myrna made another call from Guatemala. “We need to sponsor this little girl,” she told Richard when he answered. Today, the Duvalls are making sure Concepcion gets all the love and care she deserves.

Myrna would do anything for her sponsored kids — and she proved that this past October! 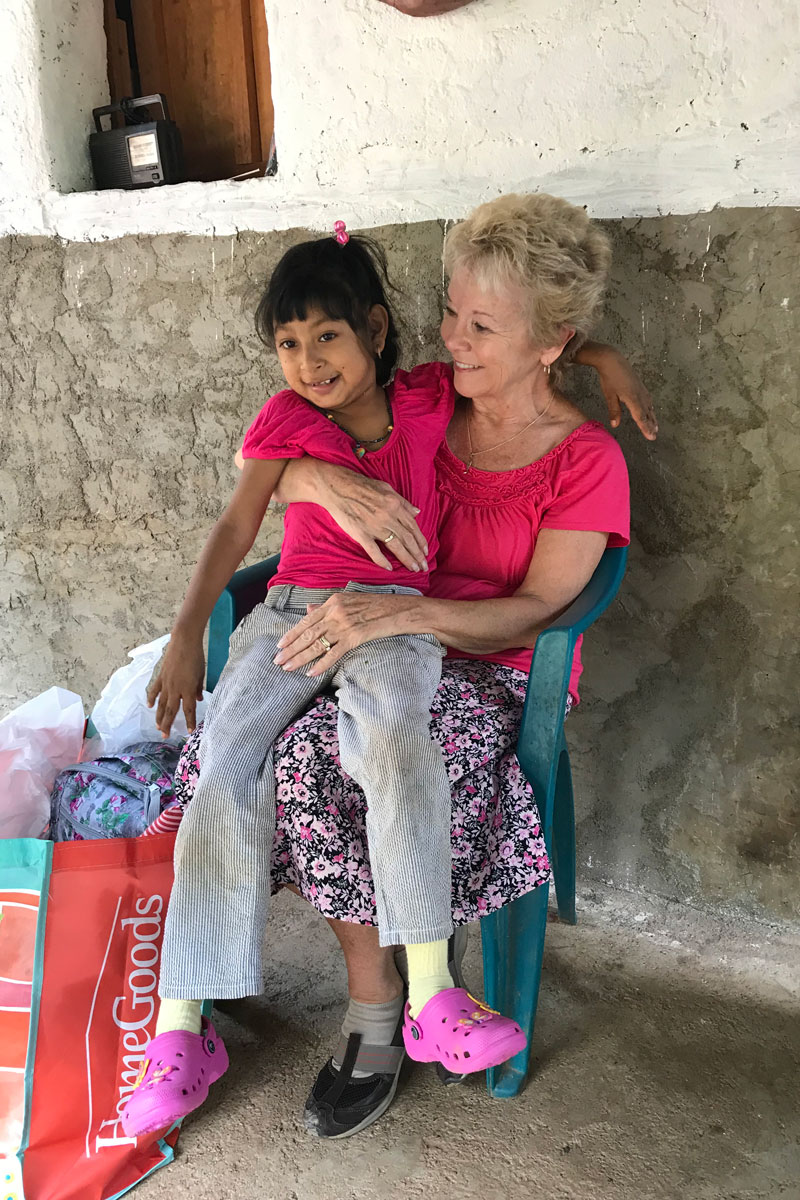 During her most recent mission trip, she had an opportunity to visit Concepcion at her home. It would be a difficult hike she was warned. But that didn’t deter Myrna one bit. She hopped into the bed of a pickup truck and bumped along the dirt road, higher and higher into the Guatemalan mountains.

Finally, the truck stopped. The path to Concepcion’s house snaked down the side of a cliff. It was too narrow and difficult for the vehicle to go any farther. They would have to walk.

Rocks jutted out of the packed mud beneath their feet, and jagged ditches cut across the path where rain had washed the dirt away. Myrna’s toes pushed to the ends of her shoes as she braced herself going downhill.

But it was all worth it. When Myrna finally reached the bottom of the hill, the trees opened up to reveal a beautiful view overlooking the mountains. Tropical birds sang in the distance, and a slight breeze moved through the palm trees.

In the middle of it all was Concepcion, sitting in a plastic chair in front of a small house. She was wearing a hot pink shirt and the most beautiful, radiant smile!

The two hugged and sat together, enjoying each other’s company. Myrna had brought hair barrettes as a gift, and clipped one in Concepcion’s hair. The little girl’s grin grew even bigger. It was a day Myrna will never forget.

And it’s a joyfulness she wants others to experience, too. Myrna encourages everyone to sponsor at least one child if possible. “It changes a child’s life,” she said. And it will change your life, too.

It doesn’t matter who you are or how big your bank account is. For a little over a dollar a day, you can help a child in poverty and build a lasting, meaningful relationship. And chances are, you’ll receive far more than you give.

“God can use anyone,” Myrna said. “He used Susan. Because of her, I’m sponsoring Mimi and Concepcion.”

He can use you, too. For just $35 a month, you can become a child sponsor and show one boy or girl the love of Christ. You’ll be so much more than the person who helps provide him with essentials like food, clothing, and educational assistance. You’ll be his hero!

Join Myrna and the World Help family of sponsors today, and rescue a child in need.