Manna, ravens, a little boy’s lunch, and YOU

We read in the Bible how God used some pretty extraordinary ways to provide for His people when they were hungry. He sent bread that looked like snow, told ravens to carry food in their beaks, and multiplied a young boy’s lunch.

God may surprise us with how He works everything together and provides for His children. But the one thing that is not surprising is that He always comes through.

Today, as in Bible times, there are many people around the world who are facing hunger. And it is the children who suffer most. Starvation means that their growing bodies can’t develop, and without nutritious food, they won’t be able to live very long.

Maybe you feel inadequate to help with such a critical need. But before you conclude that there’s nothing you can do, consider this — God provided food for His people through these unexpected means, and He can do it with YOU, too.

The Lord said to Moses, “I have heard the grumbling of the Israelites. Tell them, ‘At twilight you will eat meat, and in the morning you will be filled with bread. Then you will know that I am the Lord your God.’” – Exodus 16:11-12, NIV

While the Israelites wandered through the desert, they worried they wouldn’t have enough to eat like they did when they were slaves in Egypt. Even though God had given them freedom, they still didn’t know how He’d provide food for them out in the middle of nowhere.

The bread that God sent from heaven was so mysterious to the people they named it “manna,” which literally means, “what is it?”

The children of Israel had no idea how the food appeared for them, but God always found a way to take care of them during their own hunger crisis.

Then the word of the Lord came to Elijah: “Leave here, turn eastward and hide in the Kerith Ravine, east of the Jordan. You will drink from the brook, and I have directed the ravens to supply you with food there.” — 1 Kings 17:2-4, NIV

Elijah was in a dangerous situation when wicked Ahab became king. So, God protected His servant by having him run away. At risk out in the middle of the wilderness, Elijah’s needs were still met. God used unlikely helpers — birds — in order to feed Elijah.

God’s people are never alone. He often uses individuals around them to help meet their immediate needs, even when their situation is dire. 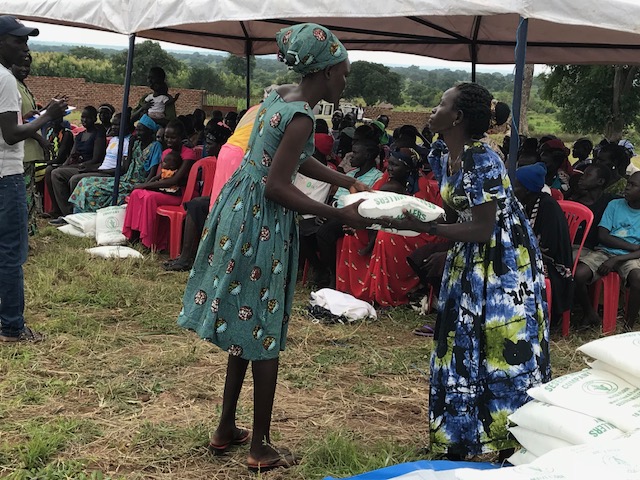 When Jesus looked up and saw a great crowd coming toward him, he said to Philip, “Where shall we buy bread for these people to eat?”  He asked this only to test him, for he already had in mind what he was going to do.

Philip answered him, “It would take more than half a year’s wages to buy enough bread for each one to have a bite!”

Another of his disciples, Andrew, Simon Peter’s brother, spoke up, “Here is a boy with five small barley loaves and two small fish, but how far will they go among so many?”  – John 6:5-9, NIV

In this passage, we read how Jesus used one boy’s generosity to feed thousands. The boy didn’t have much to give, but he offered it willingly. He didn’t get overwhelmed by the numbers he saw; he simply handed over his loaves and fish — and God did the rest.

That little bit of food was multiplied over and over again … until it was enough to feed 5,000 people with 12 baskets left over!

Today, you may be saying yourself to yourself, “I don’t have much to give. How can I possibly make a difference for someone in need?”

Well, for just $40, you can rescue one starving child. Your $40 gift will provide enough food to feed a boy or girl for an entire year.

You can help save a life! Simply give your gift and watch God use it in miraculous ways.