Vernon Brewer shares an excerpt from Chapter 1 of his book, Why? Answers to Weather the Storms of Life.
Share Tweet
or
Send an email

Earlier, to celebrate the 10th anniversary release of my book, Why, I shared the introduction to the book in a blog post.

But I’ve decided that the issues in Why are so universal that I want to share the entire book with you. After all, we all deal with trials and finding God’s will for our lives.  So I’ll be regularly releasing excerpts from Why on World Help’s blog to allow you to read it in installments.

Of course, if you would rather read the entire book now, you can order your copy for just $8.99. You’ll also have the opportunity to download a FREE companion discussion guide for small groups and a devotional for your personal study.

Today’s excerpt comes from the beginning of Chapter 1: When the Bottom Falls Out. 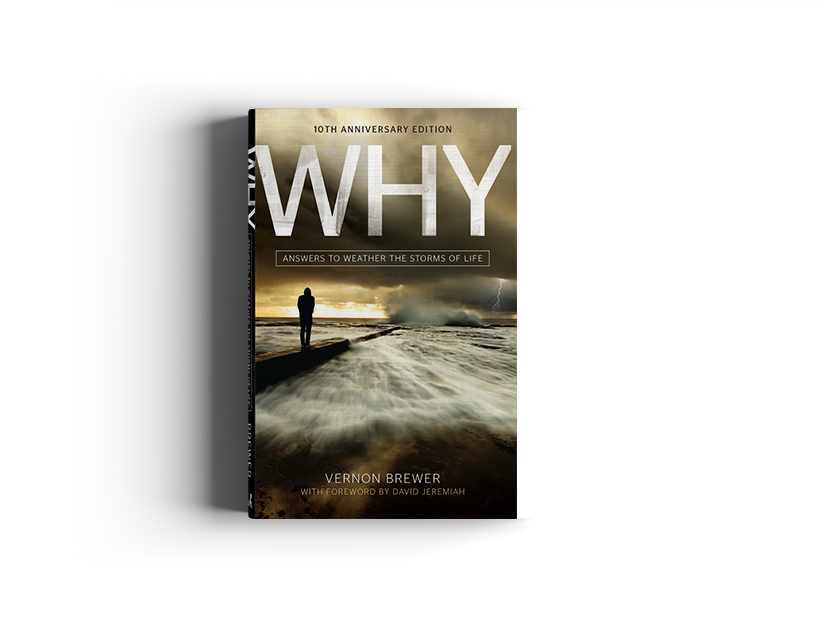 Wednesday evening, May 1, 1985, was the most difficult night of my life. Hours ticked by slowly and painfully as I lay in a room at Lynchburg’s Virginia Baptist Hospital. I had just endured a lengthy surgery — doctors discovered and removed a 5-pound tumor that was attached to my heart and lungs.

Later, the medical staff told me that if they had waited one more week to operate, it would have been too late. I was 38 years old, and my happy, busy life had suddenly come to a grinding halt.

Over and over again, I replayed the scene in my mind when I heard those fateful words … “You have cancer.” It was the moment that the bottom fell out of my world.

Only two weeks before, everything in my life was relatively normal. I was at the top of my game!

Married to the love of my life, Patty, and father to three amazing daughters — 13-year-old Noel, 11-year-old Nikki, and 6-year-old Jenny — all was well. God had blessed me with a great job that I absolutely loved as the Dean of Students at Liberty University and had called me to preach the Gospel.

In fact, I am the first graduate of Liberty University. In 1973, I graduated in the top 10 of my class — which sounds like a great accomplishment until you know there were only eight graduates in that class! No one’s name began with an “A” … mine began with a “B,” so with a stroke of luck, mine was the first name called to receive a diploma from Liberty University. I am proud of the education I received at Liberty where I learned the importance of vision and how to dream big!

So, I was sailing along in life as an obedient servant of God. What could go wrong?

Then, I came down with bronchitis and fought an intense battle with an illness that left me extremely weak. I was sick for nearly two months but never thought there was a deeper, more tragic reason behind it all.

One afternoon, exhausted, I lay down to rest. Suddenly, I felt a sharp, excruciating pain in my chest. I could hardly breathe. I learned later that the pressure from the tumor caused one of my lungs to collapse. After a rush to the emergency room and a few tests, I learned the devastating news.

In that initial surgery, the doctors decided to take out approximately one-third of my left lung in order to remove the entire tumor. But that wasn’t the full extent of the bad news I would hear that day.

During surgery, the doctors inadvertently severed the nerve to my vocal cords and diaphragm. When I woke up, I found that my ability to speak normally was gone.

The severed nerve made the simple task of speaking extremely difficult. I was forced to talk in whispers. I sounded more like a young child than a grown man. The doctors tried to give me hope; they said my vocal cords might heal in time. All I knew was that I could not preach without a voice. As a public speaker, I relied heavily on my voice.

To me, the thought of communicating with such a handicap was depressing and humiliating. But to God, it was the beginning of a long and humbling season of learning that He had perfectly planned for my life …

Want to keep reading? Click below to order your copy of Why? today.

Get the book for $8.99
Thank you. Please do not refresh the page while we process your transaction.